How long is 25 years? In the world of telecommunications, it’s an age

Snom, one of the co-founders of modern telecommunications, celebrates its 25th anniversary

How times change is currently evident for many companies, especially in the rapid changes in work and life structures over the last two years. However, if one looks at the developments from 1997 to the present day, one realises that history is indeed developing ever more rapidly. Of course, this is especially true for all areas in IT, which also includes the Berlin-based company Snom Technology GmbH.

"When we started thinking about our company anniversary, at some point we came up with the comparison that 25 years in IT is equivalent to about 2,500 years in the rest of evolution," smiles Heike Cantzler, Head of Marketing and PR at Snom. "When you consider that in 1997 Nokia's first smartphone, the Communicator, had just come onto the market weighing almost 0.5 kg, and that the clunky first Nintendo games console was considered all the rage, it's quite incredible what developments followed in the next few years!"

Yet the Berlin start-up with its founder Christian Stredicke had initially started in a completely different direction, namely with the development of a competitive "scanning nearfield optical microscope" (in short: "snom"). Whether this goal failed because of the horrendous hardware costs of the microscopes or because of the founders' increasing fascination with the completely new medium of IP telephony can no longer be precisely determined today. What is certain is that Snom kept its name despite the reinterpretation of the product and from 1997 onwards was an integral part of the community for the development of SIP ("Session Initiation Protocol") and the first world-wide codec for voice transmission - all open source and available to everyone free of charge, of course.

All this does not sound very profitable from an economic point of view. Nevertheless, it was precisely this Berlin start-up that launched the world's first IP phone for sale, the snom 100, in 2001, making the company a pioneer in the industry. Since then, things have gone steeply uphill, as evidenced by numerous awards and prizes from all over the world during this time. "What followed was certainly a wonderful time, but also very exhausting," Cantzler continues. "Very internationally oriented, a lot of fame and almost no money, there was already staying power required from everyone involved! But in fact, colleagues who were already part of the Snom team back then are still working here - so they didn't starve!" The real success started in 2005/2006. IP telephony was still considered exotic by many, but the technology and the understanding of VoIP caught on. Subsidiaries throughout Europe and the USA followed and with them the concretisation of the international orientation, to which Snom has remained true to this day.

This was followed by many new developments and the permanent search for innovations. "From our own telephone system (failure) to the connection to third-party systems for building management (very successful as a niche solution) to the development of high-quality DECT-over-IP telephones based on the open standard (extremely successful), we really tried out a lot of things to the right and left of the main path," Cantzler reveals. "It was always important for us not to leave the actual path, but to try out many possibilities. That one or the other idea was not so successful is part of it. As the saying goes: experience makes you wise!"

This experience certainly also included the fact that more capital is needed to realise some ideals. Since 2016, Snom has therefore been part of the VTech Group, one of the largest providers in the field of DECT worldwide. In the same year, after very turbulent times due to the replacement of the CEO four times in two years, Snom experienced a decisive change at its top: Gernot Sagl was appointed CEO, during this time equipped the company with the strategic orientation necessary for a globally present company and became the guarantor of smooth cooperation with the parent company. "Anyone who would have told me in 2016 that I would still be running the business at Snom in 2022, and doing so with great pleasure, would have at least questioned me," says Sagl. "But Snom is so agile and times are always so exciting - before you know it, six years have passed and no end in sight!"

At VTech, Snom is considered the specialist in the field of IP and as such has a free hand in developments and sufficient capacities. Thus, the need for headsets and conferencing solutions associated with the sudden trend towards hybrid workplaces could be satisfied much faster than a medium-sized company would have managed in that time. At the same time, Snom enjoys the backing to think and research in other dimensions. "The size of the group does not stop us from being Snom from Berlin. The company that, together with partners and customers, explores the needs and wishes of the communication of the future and tries to bring the most perfect solutions possible to the market - occasionally even tailor-made. That may not always make us fast, but it makes us all the more reliable - and even after 25 years, still curious about the future and what's to come!"

Small, amusing retrospectives through the years of Snom can be found here.

Heike Cantzler has been working in marketing and press at Snom Technology for over ten years and not only looks back on a very eventful company history, but also with curiosity about the future of communication.

Gernot Sagl was born in Carinthia, but has lived in Berlin for a long time. He has extensive international management experience and, among other things, worked for seven years as CFO at the well-known software manufacturer Betasystems before his appointment as Snom CEO. 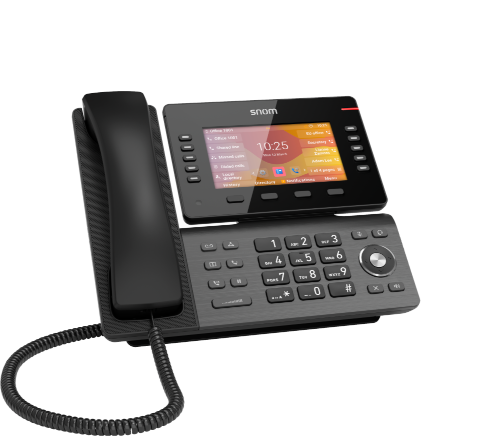