Bring more colour into the office

The Snom D7C is the most advanced expansion module for the D785, D735 and D717 phones to date. The D7C features a high-resolution colour display with a completely redesigned user interface. Connected via USB to a Snom phone, the Snom D7C adds many useful functions to the existing second screen. With the help of the 16 physical (48 virtual) freely programmable LED function keys, for example, the status of colleagues can be quickly recognised and the corresponding number dialled or a call forwarded. If the respective line or the LED function line lights up green, the colleague is available and can take a call.

And if you want to have a complete overview of up to 48 contacts, you can connect up to three D7Cs in series and thus massively expand the range of functions. Thanks to USB plug-and-play, this has never been easier.

The configuration of the Snom D7C also works by itself. You can choose whether you want to configure the Snom D7C via the existing telephone system or via the Snom web interface.

The Snom D7C is a modern extension for the Snom phones D785, D765, D735 and D717 and convinces with a large, high-resolution colour display, a wide range of applications and easy installation.

Expandable to up to three devices

The Snom D7C comes for the first time with a high-resolution 6.8" colour screen that clearly displays all important information. Apart from that, the background image on the D7C can be freely adjusted.

Full control thanks to 16 physical and 48 virtual, freely programmable function keys that can be scrolled through on up to 3 pages. This allows even large VoIP installations to be easily managed and monitored.

The Snom D7C can be cascaded with two other devices. For this purpose, the devices are simply connected to each other via USB Plug-And-Play. Thanks to the highly effective Snom software, the devices configure themselves automatically. 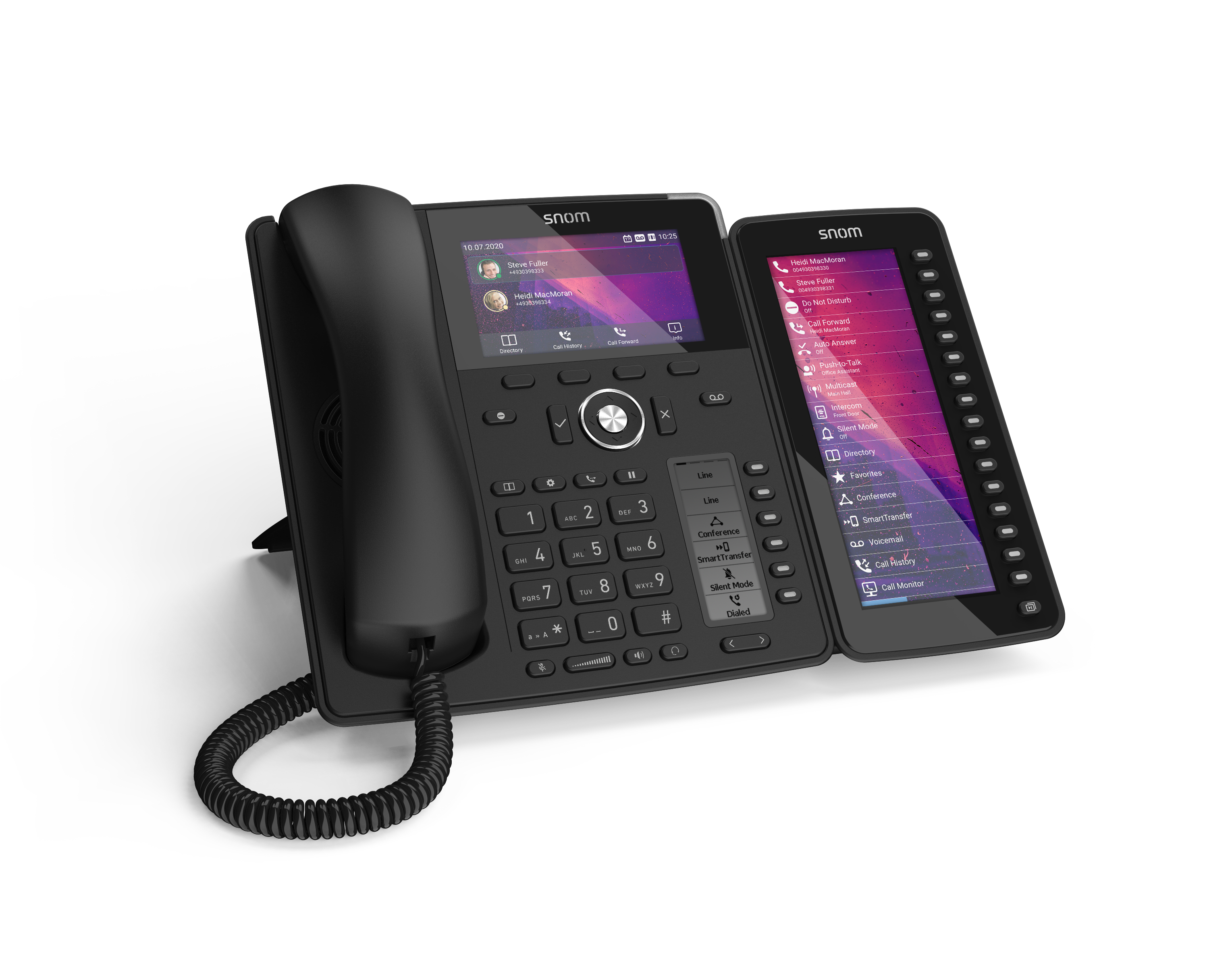 The D7 Colour has been specially developed for the new D7XX series and adapted to the timeless, modern design of the Snom desk phone series. In combination with the high-resolution colour display, the D7C is at home anywhere, whether in an office, industrial or healthcare environment.

Register now for the D7C newsletter

Everything at a glance

The new Snom D7C has a high-resolution 6.8" TFT colour display. To take advantage of all display options, the user interface of the D7C has been completely revised compared to the previous model. Important information is highlighted in colour or icons are displayed. If you like it even more colourful you can import your own background pictures. 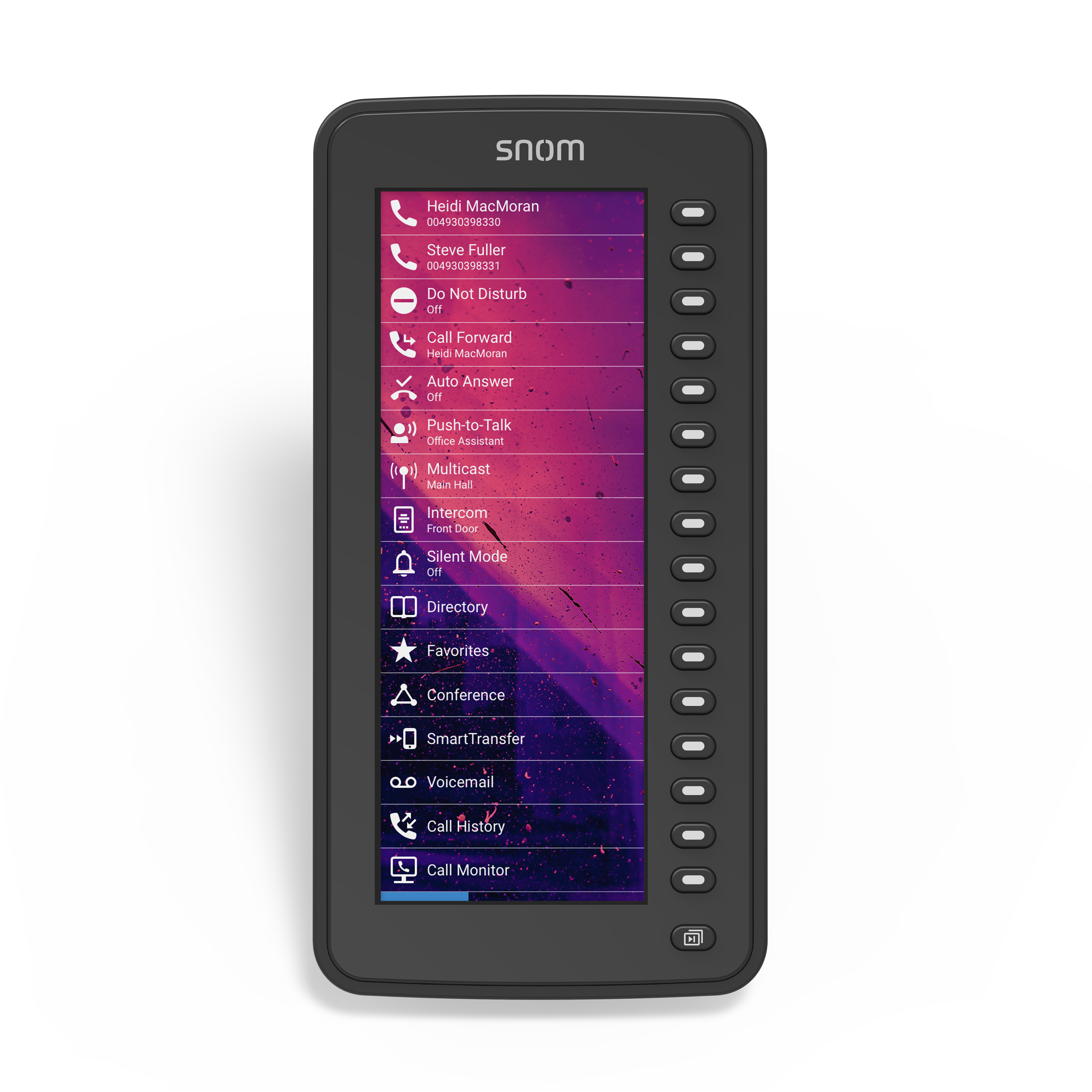 The Snom D7C can be expanded by up to two additional D7C per phone. The devices are simply connected in series using a USB cable and thus flexibly expand the range of functions. The more devices are connected, the more function keys are available. With up to three Snom D7Cs, up to 144 extensions can be displayed. In order not to loose the overview we have massively revised the user interface of the Snom D7C and offer many useful functions to keep everything important in view.

The Snom D7C is not only the perfect addition to many desktop phones of the Snom D7XX series, but is also a useful tool for everyday telephony needs.

Are you interested in the product? Then register today without obligation and free of charge for our release newsletter.